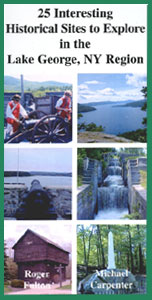 The Lake George, NY area is full of American History and American Heritage sites. It was a hotly contested area during the French and Indian War when Britain and France fought for control of the American Colonies.

The 50 cannons brought from Ticonderoga drove the British out of Boston early in the American Revolution, even before the Declaration of Independence was signed. A world class art gallery lies in Glens Falls. A wonderful natural history museum is in Granville. And, the oldest intact warship in America, the Land Tortoise, is in Lake George – literally in Lake George.

But unless you know about theses places, and how to get there, all of this American Heritage is lost to you. So we put together a great book featuring 25 of these great areas and the stories behind them.

Get out and enjoy these sites for a day trip, or just an afternoon. Broken down by access exits off the Northway (I-87), our explicit directions will get you there. So order a copy now for you, or for your family when they visit, and reclaim the heritage of this great area as your own.

To order this book, or any of our other titles, with a credit card, call the publisher Common Man Books at 866-793-0555 or go through their website at www.commonmanbooks.com.

The Battle of Cranberry Creek 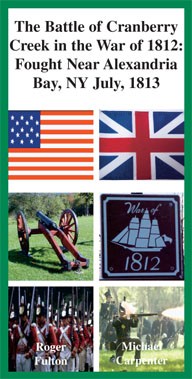 In 1999 a local 12 year old boy led us to three polished granite markers in an overgrown field on the shore of Cranberry Creek, just outside the current Village of Alexandria Bay, NY in the 1000 Islands of northern New York.

A summer of research revealed that those granite markers had been placed there by the Daughters of the American Revolution as a memorial to the brave American soldiers who died on American soil, defending against their British enemies in 1813. An American force of only 50 American soldiers and militia had repelled an attack by 250 British attackers.

The battle and the Americans killed in the attack were nearly lost to history due to neglect. In 1999 they were "repatriated" and a permanent memorial has been erected to secure the remembrance of their sacrifices. The story of the battle and the soldiers' repatriation is available in a short, 35 page color booklet through the local historical society or by mail.

To order this book, or any of our other titles, with a credit card, call the publisher Common Man Books at 866-793-0555 or go through their website at www.commonmanbooks.com.