By Angela Durrell/For the Star-Banner 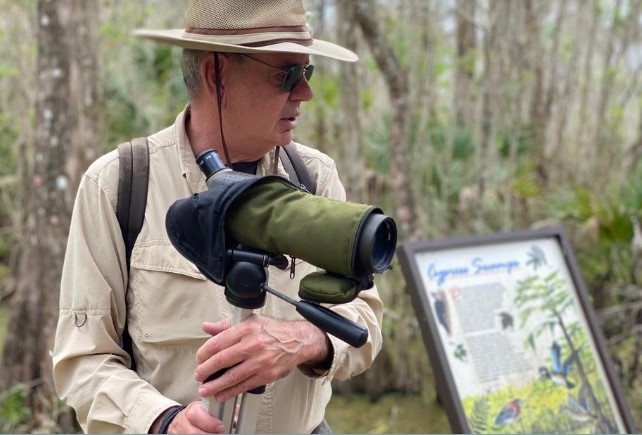 New York cop Roger Fulton provides the common-sense lowdown on the trails and attractions of Ocala, Marion County and beyond.

Roger Fulton’s passion for nature led him to create a whole new career for himself — and he’s been in big demand during the COVID-19 shutdown.

The cop from New York has divided his time between the Empire State and Florida for the past 20 years, exploring, mapping, and collecting information on the parks, trails, and outdoor recreation spots in Central and North Florida. Everything from directions and maps, barbecue spots, biking trails and bathrooms, meticulously curated, has been uploaded to his massive online database, “Roger’s Resources,” at https://rogerfulton.com/resources/

As people have been sheltering at home, they’ve looked for alternative ways of exercising and socializing while the gyms have been closed. State and local parks offer safe options for social distancing, and Floridians have been getting back to nature. Fulton’s database provides a comprehensive and easily navigated resource for them to find just the right place to go.

Fulton said he’s been a snowbird for 20 years. When he started coming to Florida, he didn’t know the area very well and his hunt for guidance came up dry.

“I couldn’t find any information about where to go and get out. Every source had their own thing, but they all had one thing in common: terrible directions,” he said.

The only way to really be sure where the best spots were and how to get to them was to walk them himself, which is what he has done, extensively, over the past 20 years.

Fulton has written several books on outdoor recreation, including the guide “Hiking Trails of the Ocala Natural Forest in Florida,” and speaks at several engagements each year, in between guiding hikes.

Some might say it’s a whiplash turnaround to go from investigating crimes to tramping the wilds of Florida, but Fulton disagrees.

“It’s all the same skill set. You go to the scene, you look around, you take pictures, and you come back and write it down. It used to be for a police report. Now it’s a book chapter,” he said.

Plus, Fulton loves meeting people and running into friends on the trails. It also gave him something new to direct his energy toward.

“It was a big help for me to be able to tell people my experience about what I’ve found, where they can go and what to look out for.”

He works closely with state parks, managing agencies and officials to chronicle and report every possible detail of the sprawling locations that people would want to know: Are there bathrooms? Are they pet friendly? What’s the address of the actual trail, and not just the headquarters?

Sometimes the source of his information can come in unorthodox or unexpected ways, and that’s fine with him. It’s how he finds the little gems, the sometimes obscure places, and locations people have forgotten about.

Local residents are usually fonts of information, with the best knowledge of where to go and how to get there safely.

“I might see a 14-year old boy on a bicycle, and he knows where everything is,” Fulton said.

When the COVID-19 shutdown happened, he was at Carney Island Park in Marion County, gathering updates for the always-expanding online database. The virus almost immediately caused cancellation of about 10 speaking and hiking engagements he had scheduled; fortunately, he already had completed 40 others beforehand.

“I came home and canceled all my future events and said, ‘Okay, people still need to get out and get exercise. So I’m going to act as a clearinghouse because I know all these places.’ I go all these places; it’s how I spend my day.”

Fulton updated his social media every day and posted reports to let people know what was open and accessible, what the rules were, and how to get there. His advice: Pick places where there are few to no people so as to lessen the chances of virus infection. The feedback from his readers was grateful.

The quarantine offered a chance for people to reconnect with their beauty in the surroundings that maybe they didn’t know existed before, or even in more familiar places that have always been there. As he prepared to head back to New York at the end of May, he observed that it even seemed to improve morale as well as health.

“I think a lot of people have been getting out more, and they’re happy about it,” Fulton said. “They’re going for that walk in the evening. People are rediscovering getting out in nature and seeing what’s in their own backyards.”

Back to Recent Happenings